Mitsurou, known as Sweets Magician (スイーツマジシャン, Suītsumajishan) is a world famous sweets chef who currently holds the rank of number 11 on the IGO Chef Ranking, making him one of the greatest chefs in the world. He is also the owner of the popular Cake Store "Magic Honey" (マジックハニー, Majikkuhanī).

Mitsurou is a rather short and elderly individual with light skin, narrow eyes, a wide nose, and very large cheeks and buck teeth. Mitsurou wears a formal long sleeve white shirt and pants along with a black and yellow striped vest and headpiece which references his honey-based theme.

Not much is known about Mitsurou's personality, but he seems to be a cheerful individual and is always seen smiling. Considering his profession it can be assumed that he has a liking for cakes. His attire also suggest a liking for bees or honey.

Being number 11 on the IGO Chef Ranking, Mitsurou is one of the top 20 greatest chefs in the world, making his skill and knowledge of cakes top notch. Mitsurou's primary skill lies in making cakes of the highest quality and his title may suggest that he is some form of magician, but of what sort exactly is unknown. Despite his great skills, he was unable to make it to the final round of the Cooking Fest. He was also not seen among the chefs who were prepared to fight against the Gourmet Corp., indicating that he may not be skilled in combat.

Mitsurou was one of the many chefs that attended the 50th Cooking Festival in order to win the title of Super Cook. He was seen among the many competitors who entered Cooking Stadium and later he was one of the many chefs prepared to test his skills in the Cooking Triathlon. Despite his great skill, strength and high standing within the chef ranking, he was unable to get past the preliminary rounds and ended up not reaching the Championship Tournament.

It is unknown what became of him after the Gourmet Corp. attacked the Cooking Stadium. 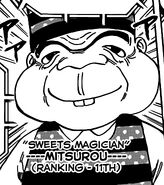