The Mother Snake (マザースネーク, Mazā Sunēku) is a titanic species of snake from the Gourmet World's Area 4, named because it is the "Mother of all Snakes".

They are the longest and largest species of snake on the planet, it is even said that they grow to the length of the circumference of the planet. Quinn is the only Mother Snake that has been seen, so it is unknown if all Mother Snakes share the same appearance and coloration that she does. Quinn has a very thin build, similar to a Garter Snake. A fully grown Mother Snake is shown to be absolutely titanic in size, easily dwarfing the Four Beast (a beast that is already shown to be comparable to the size of a small city) in size.

It is powerful, even when compared to other Gourmet World creatures, who bow down when they see its face. This isn't because they worship or respect it, but because a Mother Snake will eat any creature whose face it sees. They have amazing speed, even as a child and can reach 400 kilometers an hour, and an adult is said to be as fast as a meteor. They also posses incredible stamina as demonstrated by Quinn, who easily traveled tremendous distances and wasn't the least bit tired from her travels. They can widen their mouths to an amazing distance in order to swallow large prey. They seem to be constrictors rather than being venomous, and Quinn is shown to crush clean through a Four Beast's lower limb after wrapping itself around the creatures legs and squeezing as hard as she could.

The Mother Snake has come to be known as one of the Eight Kings, and at one point in history, their ancestors were said to have ruled the entire world. Besides possessing immense strength, what truly set them apart from most other Gourmet World beast, is said to be their "sensitivity", which allows them to sense potential dangers, and has helped them survive mass extinctions. To this day, the descendants of the Mother Snake is said to rule over one of the continents of the Gourmet World.

The current Mother Snake that holds one of the seats within the Eight Kings has an enormous amount of strength that when it fought against another member of the Eight Kings, it produced an enormous, deadly tornado in its trail, which built up horizontally as opposed to vertically. 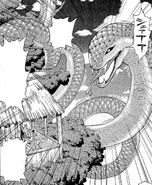 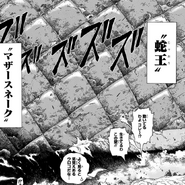 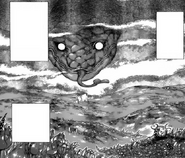