The Rubanda is a very large pudgy-looking bird with a ghastly humanoid face, resembling a bald male monster with sharp teeth, a purple tongue, a crooked nose, a furrowed brow and forehead and slanted pupil-less red eyes that always have an angry and ferocious expression. Its body mostly resembles that of a large round pudgy bird with dark brown feathers, a big puffy cone-shaped tail and extremely large magenta claws with eight digits on each and large black talons.

It only lives in the Devil Athletics, but it does quite well there with its cunning and cold-blooded nature. Like all the creatures of Devil Athletics, the Rubanda will attack anything that enters its territory and subject them to cunning attacks and illusions caused by its unique hallucinogenic breath, showing that it is a very intelligent creature capable of even giving Toriko a hard time.

This quixotic bird is capable of a number of unusual feats ranging from causing hallucinations with its bewitching breath to creating visual isolation effects. Just looking at it is repulsive enough that most Gourmet Hunters despise it. It can even isolate its smell.

Toriko and Rin encounter a Rubanda while traveling through the 1st Biotope at the Devil Athletics's 5th stage.[3] Even with Rin providing instructions on the beast's location, Toriko is barely evading its attacks, due to the hallucinatory breath it produces, making it hard to pinpoint its exact location. Still, after Rin sprays Thunder Peppermint on Toriko to sharpen his senses, the beast proves tough with its Isolation technique, with which it launches a barrage of attacks on Toriko, until finally, Terry appears and defeats the beast with one hit. The beast stands back up with its guard up against Terry. They eventually follow Terry to another route away from the beast. Later when Starjun arrives in the Devil Athletics, he easily kills and mutilates the Rubanda with ease.[4]

During Toriko and Komatsu's climb up the Sky Plant, they ran into a large flock of what appeared to be Rubandas, which naturally frightened Komatsu. However Toriko realized that the so-called Rubandas were actually a harmless subspecies known as Pseudo-Rubandas which caused no trouble for the two as they went on their way.[2]

In Toriko: Gourmet Survival, the Rubanda appears as one of the many enemies on Megamori Island which can be killed and harvested for its meat.

It can only be found in the Devil Steps located deep within the island's final underground volcanic area.

In Toriko: Gourmet Survival 2, a subspecies of Rubanda appears in the Gattsuki Continent's Sky Plant. This breed of Rubanda actually has a long beak-like nose with a mouth underneath and a plumage of bright white, red and purple feathers and tail feathers resembling a peacock's. However it still maintains a ferocious appearance.

In Toriko: Gourmet Monsters for the 3DS, the Rubanda appears as one of the many tamable beasts that can be captured and trained in the game for the Gourmet Royale coliseum battles.

It can be fought and tamed in the 1st Biotope and can use its hallucinogenic breath in battle to inflict status ailments on its opponents.

The Rubanda has been featured on few pieces of merchandise, mostly trading cards along with a few figurines, stickers and in a few video games. 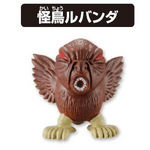 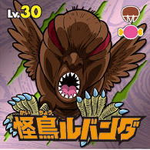 Rubanda sticker
Add a photo to this gallery