This article pertains to the main dish in Acacia's menu. For the Nitro of the same name, see NEWS (Nitro).

NEWS (ニュース, Nyūsu) is a mysterious ingredient that makes up Acacia's Full Course Menu Meat Dish. This ingredient resides within the Food Region Forest on the back of the Deer King, that lives in the Gourmet World.

NEWS appears as beautiful, sparkling red meat of top-class marbling. It is found in ropes that connect to something.

Unlike all the other ingredients in Acacia's Full Course, NEWS is absolutely flavorless, unless eaten after the Fish Treasure ANOTHER, which awakens the Gourmet Cells of the tongue.[1][2]

Consuming NEWS fully awakens the Gourmet Cells of the left leg,[3] and tasting the flavor of NEWS enables one to control the speed of their Gourmet Cells' cellular division to exceed the speed of light (299,792 Km/s or 186,282 Miles/s), allowing them to create and manipulate Back Channel.[2]

Goblin Ramon and Megarodras of the 0th Biotope are assigned to capture NEWS within the Food Region Forest, but their task is interrupted by Alfaro of the Gourmet Corp. and his team of Red Nitro.[4] The result of their fight is unknown; however, Alfaro returns unscathed but without NEWS.[5]

When the Four Heavenly Kings and their allies arrive in Area 6, they are divided into teams to seek out each of Acacia's ingredients at a faster rate. Zebra and Brunch are teamed up by Jiji to seek out and capture NEWS in Area 5.[6]

in Area 2 The Four Heavenly Kings, Komatsu, Starjun, and Aimaru eat the Meat Dish together.[7]

Close up of NEWS 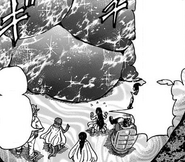 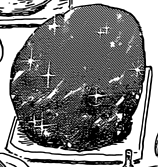 NEWS size
Add a photo to this gallery