The Namibouzu (ナミボウズ, Namibouzu) is a species of living sea current monsters native to the seas of Area 6.

Namibouzu appears as a gigantic creature made almost entirely of sea water. It has a large head with two glowing eyes and a maw, along with what resemble dorsal fins on the top of its head. Its head overall somewhat resembles a monstrous fish.
In actuality, Namibouzu has main body, which is very small. The rest of it is mass of seawater, which the creature can shape at will, such as becoming larger or growing more arms.

The Namibouzu is a vicious beast that attacks any prey that comes close to its waters. Members of the species live together in groups among the Conveyor Belt Islands that they call home, often lurking beneath the waters awaiting for prey to ambush.

As its real body is very small and hidden in large mass of water, it can easily evade most physical attacks. The main body is located in the head of its apparent one, and it is its weakspot. It seems to be quite weak, as single strike or cut will cause the Namibouzu to instantly collapse. It is also apparently weak to intense flames. Their small size also allows them to easily camouflage themselves among the waves and attack unsuspecting prey. They are also resistant to the harsh sea currents of the Conveyor Belt Islands.

As the Four Heavenly Kings and their allies make their way into Area 6's Conveyor Belt Islands, their Turtloon is confronted by a giant Namibouzu. As the gigantic beast prepares to devour them whole, it is suddenly electrocuted and set ablaze by Brunch and Starjun. However more Namibouzus soon arrive and attack the group, luckily they are quickly taken out as well, this time however, they are saved by Jiji with the use of his Gunman Sunfish. 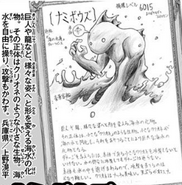