The Nikoniko Manatee, also known as the Smile Manatee, is a marine mammal beast that is always smiling and is said to be the most pacifistic animal in the world.

They are large gray-skinned manatees that can grow to be about half the size of a cottage. Their heads, however, resemble more of elephant seals than those of manatees. They always seem to have a "smiling" expression on their faces and a content look in their large, black, cutesy eyes.

Nikoniko Manatees are peaceful and joyful creatures that posses no hostility and mainly live simple lives in calm waters, such as the seas of the paradise of Peaceful Island. True to their title of most pacifistic animal in the world, these creatures are absolutely harmless and friendly to all beings. Because of their jolly nature, they always have a cheerful expression on their faces.

In the mating seasons, breeding seasons, and when raising its children, it has the ability to release special pheromones that can relax dangerous predators and other animals, allowing them to go about their business without threats.

Humans have been able to harness the pheromones of the Nikoniko Manatee for special uses, such as animal therapy. Its pheromones are also used in the making of Super Relaxation Fragrance, a special and potent fragrance designed to relax and pacify even the most dangerous of wild beasts for a certain amount of time.

Rin tries using Super Relaxation Fragrance to calm down a Devil Serpent, but she accidentally uses Battle Fragrance instead, causing the beast to go wild.[1]

When Toriko pays a visit to Ichiryu at his home, the two sit together and talk about recent events while looking out towards the lake near the house. During their conversation, a Nikoniko Manatee gleefully jumps out of the water, but Toriko is too immersed in the discussion to notice.[2]

Full view and size of a Nikoniko Manatee 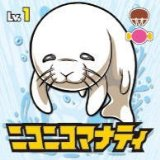 Nikoniko Manatee Sticker from ver.3
Add a photo to this gallery