The Octomelon (オクトパスイカ, Okutopasuika) is a fruit-like octopus beast that has stripes and a head that resembles a watermelon. An Octomelon named "Octo-chan" by Komatsu, is currently used as a method of transportation as well as a place for the Four Heavenly Kings to rest in the Gourmet World.

The Octomelon has the basic form of an octopus, but is exceedingly huge, making it easily the size of a small mountain. Being that it is both a beast and a fruit, its skin is striped with the similar pattern of a watermelon's rind. It has eight long and thick striped tentacles, two large eyes and a small tube-shaped mouth. It has a large hollow protrusion on its belly where the mouth usually is on most octopuses and this hollow belly growth is large enough to carry Terry Cloth, Quinn, Kiss and Yun. The belly growth also appears to have numerous tiny holes in it that appear to resemble windows and a large hole on its bottom where the beasts can enter through. Apparently plants and soil can be grown and attached to an Octomelon's head, as shown with the presence of Chichi's Tree House on top of one.

Octomelons, or at least the only one shown so far, appear to be docile and non-hostile creatures who prefer to avoid battle and simply use their ability to hide from predators and threats. They can be tamed through unknown methods and will show no ill will towards creatures weaker than it such as Human World residents. The only one seen also appears to be a bit cowardly and completely unable to defend itself against deadly environments and will show relief once safe from danger, showing that it can be quite expressive.

Young Octomelons will bury themselves underground in order to ripen their bodies like a plant and may do so for many years as shown with the one in the 1st Biotope.

Octomelons have the ability to create Rest Rooms around their bodies which effectively erases their presence from most hostile beasts and even individuals with heightened senses, although if creatures stronger than it get too close, they'll be able to sense the Octomelons's presence and attack. The Octomelon is unable to fight back against creatures or elements stronger than it and may have to rely on the strength of its owners in order to survive.

If tamed, Octomelons, like Limousine Jellyfish, can be used as mobile homes and their ability to project Rest Rooms makes them an excellent way to traverse and survive within Gourmet World without risk of danger so long as the Octomelon avoids interaction with stronger beasts. Another astounding trait of this beast is its amazing capability to store creatures and objects safely inside its belly, as it has managed to lodge young species of Battle Wolf, Emperor Crow and Mother Snake safely inside itself along with a huge pot and other enormous plates, without getting strained.

After the Four Heavenly Kings, Komatsu and Chichi finish their feast, the Octomelon awakens from its slumber. Chichi states that it was good that the beast had awakened from its slumber at the same time the Heavenly Kings were ready to depart, as they will be using it as their tent in the Gourmet World. When Sunny said it was gross, Chichi says that the beast is not something to be looked down on, he then explains how the beast can act as a moving Rest Room even in the harshest areas of the Gourmet World, nicknaming it a Safety Monster. Chichi continues to say that eventually monsters with higher Capture Levels will find it however he seems little worried as he believes it should be enough for the group. Lastly, the elder Nitro states that the beast was captured by Ichiryu himself for his disciples to use, showing his dedication and belief in his disciples.

The beast is next seen by the Toriko Harbor where everyone bids farewell to the Four Heavenly Kings and Komatsu as they depart for the Gourmet World. When the preparations finished, the beast leaped from the water and readied to carry Terry, Quinn, Kiss and Yun inside its belly as well as the Four Heavenly Kings and Komatsu. The beast swiftly swims on the ocean and heads for the third entrance to the Gourmet World, Yutou Island's Harbor of Evil Spirits. After arriving and battling with the boss of the island's Real Mist, the Octomelon was affectionately given the name "Octo-chan" by Komatsu.

Octomelon passing around a monster 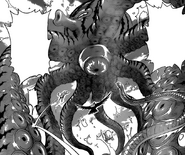 The group entering the Octomelon's belly

Octomelon with the group depart for the GW