The Ozone Herb (オゾン草, Ozon Sō), also known as the "Ether Herb", is a plant that blossoms in the aether. It is said that one bite can make one feel as though they have risen to heaven. It is found on Vegetable Sky and is nicknamed the "King of Vegetables."

The Ozone Herb is a large, thick, leaf-shaped herb wrapped up in numerous leaves that absorb the harmful radiation from sunlight and other pollutants, giving the outer leaves a very bitter smell. To peel the Ozone Herb, two leaves must be unwrapped simultaneously; otherwise the entire plant will rot (or turn into a seed in the anime), a task so difficult even a Nitro is incapable of performing it alone. The process for selecting leaves is to begin pulling from the strongest smelling leaves to the ones with the weakest scent. To eat the Ozone Herb itself, it must also be bitten in two different places simultaneously, or else it will rot. Because of this, capturing the Ozone Herb tends to be used for training to enforce teamwork between the Gourmet Hunter and Chef in a Combo. In the anime it is shown that cutting the Ozone Herb also requires it to be cut in two places at once. Because of the difficulty in unwrapping, eating, as well as the danger in going to the "Vegetable Sky" and back, the Ozone Herb has a Capture Level of 68. Luckily though, despite the difficulty reaching one they are very common which ensures that multiple attempts can be made to eat the center.

The Ozone Herb has strong texture and is elastic such that lightly biting it will cause the eater's teeth to bounce back. The fibers of the plant are packed extremely tightly together and send vibrations through the jaw when bitten apart. In terms of taste, the Ozone herb is described as being transcendentally delicious with a exhilarating and refreshing savoriness mixed with an almost addictive leafy bitterness that spreads out with each bite. The outer leaves are also used to make "Ozone Tea," an extremely bitter tea that is considered a delicacy although it requires some time to get used to.

The Ozone Herb is the first item requested by Ichiryu for Toriko to capture as part of his list of ingredients to capture in preparation for Toriko traveling to the Gourmet World.

At Toriko and Rin's wedding reception, the Salad Dish is served under some AIR.

In the manga, the Ozone Herb rots away when it is incorrectly peeled or eaten. However in the anime, it is shown that once its body rots away all that is left is one large seed. 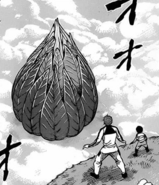 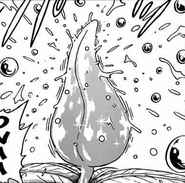 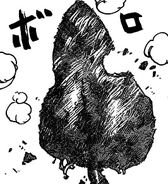 Ozone Herb as shown on the back cover of Volume 13

Ozone Herb Sticker from ver.4
Add a photo to this gallery