The Pankuchen is a giant panda beast with rolls of baumkuchen layer cake growing out of its body. It is a beast with a capture level of 98 that hails from Zabel Island in Gourmet World and has appeared on the Gattsuki Continent. It is one of the bosses of Toriko: Gourmet Survival 2.

It is a giant, muscular, black and white panda with rolls of baumkuchen growing around its arms, legs and waist, making them resemble bands. Its baumkuchen is brown on the outside and has a beige creamy color on the inside. It has a single tail that splits off into four, each with a baumkuchen ring on the end of it, and the baumkuchen has several red spikes growing out of it. It also has two red spikes growing out of its shoulder. The one the Four Heavenly Kings fought also has a scar across its left eye.

It is a battle-loving beast that fights till the end. However not all members of this species are as mighty and brave as they seem as some were driven out of their habitat on Zabel Island along with other weaker Gourmet World beasts from species such as the Mamyuu, King Landler and Asura Tiger.

Being a beast from Gourmet World, it is a physically powerful beast of tremendous strength above any Human World beast's and it is also very fast to boot. It can create big rolling baumkuchen rolls from the baumkuchen on its paws that can crush enemies with ease and are as heavy as boulders. If it falls from an attack or otherwise, it can use its sturdy tail to get back up on its feet and quickly recover from attacks. It can also spin itself incredibly fast, causing its tails to swing around like a flail and with the spikes on their tips they are a deadly force. It is also capable of slamming its tail down on its opponents with powerful force. However, the fact that one lives in the Human World rather than the Gourmet World is likely an indication that the one seen in the game is one of the "weaker" beasts that could not survive in Gourmet World and was driven out due to its harshness. 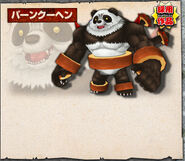 A cut of Pankuchen meat
Add a photo to this gallery