The Parasite Emperor (パラサイトエンペラー, Parasaito Enperā) is an extremely powerful creature created through cross breeding many different kinds of ferocious insects inside Tommyrod's body. While Tommyrod stored it inside his body, he used most of his energy just to keep it from hatching. He preferred not to let it out unless the situation was dire, though he had to do so eventually in order to fight the saiseiya, Teppei.

The Parasite Emperor is a grotesque amalgamation possessing the traits of numerous insects and arachnids. Its overall body shape resembles that of a purple scorpion, including the tail but with an engorged bulbous formation at the tip where the stinger is located. It also sports six spider legs covered in hair, the wings of a cockroach (which can use to fly), the back legs of a locust and the forelegs of a mantis. In the front of its body, the beast sports two pair of pincers similar to those of a Hercules Beetle and Stag Beetle

Its face has an elephant-like trunk and large pitch-black eyes, and beneath its trunk is its actual "main body" which resembles a small little white worm or larva with a somewhat cutesy appearance, that has little black eyes (that can glow red in the anime), numerous tiny legs and a small mouth with tiny sharp teeth, and lower on its little body it has an opening from which it is capable of ejecting spider webs to subdue opponents.

It was a mindless killing machine with an insatiable bloodlust that killed anything in its path without a second thought. It was also a very restless beast, always attempting to escape Tommyrod's body thus putting a lot of strain on its host.

It is a devilish entity that will devour anything without discrimination and possesses a large number of abilities. It can alter the temperature of its own breath and release it as either a freezing cold breath that can freeze parts of a target's body or as a high temperature gas that can melt anything on contact. While being an insect, it also possesses the traits of an arachnid and can create a very durable spider web with which it can constrict opponents. The large stinger on its tail contains a deadly scorpion poison, however its full effects are unknown as no one was seen being stung by it. It has an incredibly super fast growth rate (demonstrated by its rapid molting) and can keep on growing larger and stronger as time passes, giving it immense strength that is capable of even lifting the Hellboros, a creature with a weight of 60 tons. After its first molting, it gained a large pair of insect wings which allow it to fly about freely.

After Tommyrod was driven into a corner by Toriko's continued efforts and Teppei's fierce knocking, he was forced to release the Parasite Emperor at the cost of what little energy he had left. As he finally allowed his creation to hatch he gave it his blessing to go wild and kill all in its path before collapsing and falling unconscious.

The Parasite Emperor proceeded to attack Teppei with its wide array of abilities, luckily the saiseiya's swift moves were enough to dodge its barrage of attacks, but soon enough the creature began molting its old form away and grew larger and stronger, proving that this would be a difficult match. However before the battle could continue, the Hellboros (having been released from its icy prison by Teppei)

appeared and proceeded to attack the Parasite Emperor in a fit of hunger, biting down on the beast the minute it found it.

A fierce battle between the two power houses soon began, but to gain the upper hand the Parasite Emperor flew skyward to shake off the Hellboros, however its biting grip was too firm and it had no intention of abandoning its potential meal. The battle continued for quite a while but it would soon come to an end as the two creatures were instantly killed by Alfaro.

Much time later, a revived Tommyrod mentions now having a new assortment of stronger insect beasts at his disposal and later during Ichiryu break in to the Gourmet Corp. base in the Gourmet World, Tommyrod is seen with a new parasite within his body.

During the Gourmet Corp.'s invasion of the Cooking Festival, Tommyrod finally unveils his latest creation, the Giant Parasite, a superior and more powerful version of the Parasite Emperor.

Appearances in Other Media[]

The Parasite Emperor makes its video game debut in the PSP game Toriko: Gourmet Survival 2. In the game's story, the Gourmet Corp. sous chefs go to the Gattsuki Continent to intervene in the Four Heavenly Kings' procurement of the continent's rarest ingredient. When the sous chefs finally face off against them, Tommyrod once again unleashes a Parasite Emperor to defeat them, however it is eventually defeated by the Four Heavenly Kings.

In Toriko: Gourmet Monsters for the Nintendo 3DS, the Parasite Emperor appears as beast enemy used by Tommyrod. It also appears to be tamable and can be used for the Gourmet Royale's coliseum bouts.

The Parasite Emperor has been featured in several pieces of merchandise, such as figurines, video games and in the Trading Card Game. 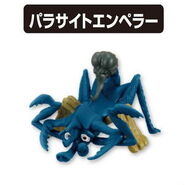 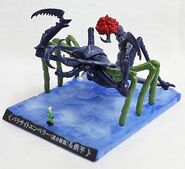