Patch (パッチ, Patchi) is a member of the illustrious G7 (Gourmet Seven) of the IGO. He is one of the seven "Taste Masters" chosen from the chief member-nations from the IGO. They take part in important decisions of the Gourmet Age, such as assigning the number of stars in hotels and restaurants and the ranks of cooks. They also serve as inspectors for the IGO.

He is a middle-aged man that wears a suit and has a moustache that is long.

He is the one who came to taste Komatsu's Century Soup and made Komatsu and the Hotel Gourmet a six stars (previously five).

He is seen at the Cooking Festival with a bunch of Gourmet SP and comments on Komatsu's potential as a chef. He tells Toriko that the SP are not at the festival to protect him, but to protect the chefs.

He is later seen with his fellow G7 members discussing about the missing chefs and who would win Cooking Fest, with most of the other members rooting for Zaus or Setsuno. When Patch was asked who he predicts would win, he replied that one of the newcomers may have a chance at victory.

A year and a half later, he was one of the many people who went to the World Kitchen to say their goodbyes to the Four Heavenly Kings and Komatsu before they set off to Gourmet World.

As with all members of the Gourmet Seven, they all have an unbelievable sense of taste, it is even said that they can recognize the taste of a single grain of sugar in a 25 meter pool. 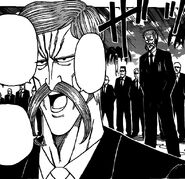