Peck is a young boy who appeared in the Toriko 3D movie. He is a young hunter-in-training hailing from a village in Teran Plains who sought out Toriko's aid in helping him save his village from a vicious Gerold. 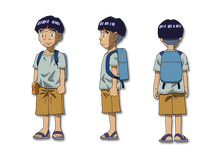 He is a short young boy with tanned skin and dark purple hair which he keeps in a bowl cut. He has big brown eyes, a unibrow and a rather large nose, and his overall facial features make him resemble Komatsu. He wears a simple gray shirt with dull orange-colored pants and gray sandals with blue straps. On his back he carries a small blue backpack where he keeps his Gourmet Picture Book, and on the right side of his waist he has a small orange pouch where he keeps his slingshot.

Peck is a humble and bashful child, always addressing others respectfully or nervously. He grew quite close to Toriko during their time together, seeing him as something of a mentor or father-figure and cared much for his safety due to that he had recently lost his real father, which had effected him quite deeply. He was also quite the coward, despite coming from a village of hunters, preferring to run from wild beasts at first sight rather than face them, and even his fellow villagers consider him an expert at running away. However after traveling and learning from Toriko, he became much more courageous, having been taught how to face his fears and subdue strong beasts without using physical strength.

Peck was first seen wandering around World Kitchen, asking for Toriko's location. While asking the Butcher Shop Owner, Tom overheard, and offered to lead him to Toriko. Tom dropped him on an island and told him to find Toriko himself. On the island, a Red Haired Pig chased after him, and in the end, Toriko finished the pig off. When Peck saw Toriko, he fell unconscious; haven't had food in days.

Over a meal, Peck requested that Toriko help him and his village get rid of the Gerold that's been terrorizing them, and offered a really low price, since he doesn't have anything else to offer. Toriko refused with that price, but agreed to help if they'd give him the Gerold instead. Peck introduced himself, and accompanied Toriko on their way to the Teran Plains. Through the journey, they encounter a beast, and through Peck's Gourmet Guidebook, knew it's a Bat Snake.

While running from it, Peck explained that he's not good at hunting, and that he came representing his village since he's confident in his running skills. He tried using his slingshot, but all missed, and then requested Toriko to do something. Toriko used Knocking instead of killing it, since he doesn't kill what he doesn't eat. Moving on, they came across some ingredients, and using his knowledge, Peck led Toriko to some food which they dined on, and Toriko complimented him on his knowledge. Peck, on the other hand, mentioned that this knowledge won't lead him anywhere, as it won't defeat the Gerold, and asked Toriko to teach him hunting. Toriko pushed him to fight a Runaway Goat as a way of teaching him to utilize his own skills. Thinking through what Toriko said, Peck gathered confidence and used his knowledge of the Runaway Goat's weakness to send it off the cliff, killing it.

After finally reaching the village, Peck introduced Toriko, and lit a fire to start the banquet. Amidst the meal, the Gerold entered. Peck watched as Toriko beat the beast in amazement. After the fight, Toriko deduces that the Mammoth Bear was the one who led to the Gerold's starvation.

Peck didn't know about that beast, as it wasn't in his book, and thus decided to accompany Toriko in the Mammoth Bear's hunt. Peck led the way, since he knew the shortcuts due to all the village's hunts. He then asked about Toriko's Kugi Punch before taking a rest at a small pond, which turned out to be the Mammoth Bear's footprint. Suddenly, a pack of Barbarian Monkeys appeared, and Peck tried attacking them, again to be saved by Toriko. Peck clung on Toriko's back, and evading beast after another, they finally reach the top of the mountain where the Mammoth Bear is.

When the Mammoth Bear locked Toriko to the ground, Peck came running to help, ignoring Toriko's calls to run away, as he's always running from things; Peck used what he heard about the beast's fear of light and lit a small spark on the beast, setting Toriko free of the it's grip. After the fight, Toriko shared the Mammoth Bear's meat with the village, as thanks for what Peck did. Peck mentioned he can't leave his mom, and asked Toriko if they'll ever meet again, to which Toriko affirms.

Later, Peck was seen in the World Kitchen again, but this time to offer them a hunt he captured. There, he thanked the Butcher Shop Owner, and met Tom, who complimented him on his catch, and shocked him by mentioning that Toriko just dropped another Mammoth Bear by the market.

Peck originally appeared in the original Toriko Oneshot from 2007 but only as a nameless villager. The character who accompanied Toriko in the oneshot was actually an early version of Komatsu.

Peck's character actually originates from Mitsutoshi Shimabukuro's other manga oneshot Eriya where he is a young school boy named Mogutan.

Peck and Eriya in Oneshot 2007
Mogutan from Eriya