Penpen is a big name Gourmet Hunter who along with many pros hopes to find GOD.

Penpen is a tall and muscular man with a large afro, abundant chest hair and large lips who is always seen wearing small sunglasses. He wears a simply gray vest with a raised collar.

Not much is known about Penpen, but the fact that he helped to protect chefs and civilians from the Gourmet Corp. shows that he is likely a brave and honorable man.

Being a big name Gourmet Hunter mentioned along the likes of Sakura and Jirou indicates that he is likely a powerful and well-recognized hunter of great skill. The fact that he stood up to the Gourmet Corp. is further indication of his skills.

Penpen was mentioned by Grinpatch as one of the big name Gourmet Hunters who was preparing for the Gourmet Eclipse and GOD.

He was seen at the Cooking Festival along with other big name hunters and saiseiyas. He later also participated in the fight against the Gourmet Corp.. 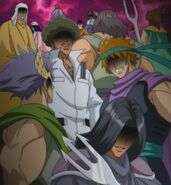 Penpen as depicted in the anime during his first mention

Penpen behind Renalle going to the Cooking Festival

Penpen next to Renalle going to the Cooking Festival (anime)