Potchy is a large cat of unknown species native to Gourmet World who serves as Ayame's animal partner.

Potchy is a giant, pudgy black cat whose size is so large that Ayame can ride on its back like a steed. Potchy has remarkably large eyes with slit purple pupils which seem to glow even during the day, giving it an ominous appearance.

Not much is known about Potchy's personality but it appears to be very loyal to Ayame. 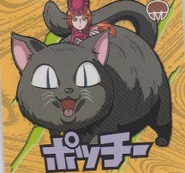