The Rainbow Fruit (虹の実 (にじのみ) Niji no Mi) is a legendary fruit that was rumored to have gone extinct, however one Rainbow Fruit plant still grows in the IGO's 8th Biotope Garden. Prior to the many disasters that befell the biotope and the Human World, the fruit used to be surrounded by a pack of Troll Kongs who used its sweet scent to attract prey, although the current status of the Troll Kongs and the fruit is unsure after the events of the Meteor Spice, although it is presumed they were revived by saiseiyas. The Rainbow Fruit is the Dessert Course in Toriko's Full Course Menu.

The fruit received its name not just from its colorful appearance, but from the way its juice, when evaporating into the air, gives off a rainbow. When placed in one's mouth, its flavor shifts seven times, making the eater taste a wide assortment of delicious flavors. Also of note is that the color and taste of the fruit depends on the humidity and temperature of the air. It's so delicious that most beasts want to eat it by instinct and try to eat it even while being eaten themselves. Because of its intensity, people are cautioned against eating too much of it.

The nectar of the fruit is so concentrated that just a single drop could turn a whole 25-meter pool into a huge bowl of fruit juice. Combined with alcohol, Rainbow Fruit juice is called "Rainbow Cocktail", and it is widely revered and sought after by bartenders far and wide. It can also be made into the strong alcoholic wine simply called "Rainbow Fruit Wine", which has a very high 85% alcohol content.

Johannes, under orders from the IGO, requested Toriko's services in capturing the Rainbow Fruit growing in the 8th Biotope as the IGO was unable to acquire it using their tanks. Toriko agreed, and he and Komatsu were taken to the 8th Biotope by Johannes where after surviving several traps and a horde of Troll Kongs, they were able to finally acquire the Rainbow Fruit, however Toriko only took one fruit as to not upset the Troll Kongs' hunting methods and their way of life.

When the Gourmet Corp. invaded the 8th Biotope, they took each and every Rainbow Fruit and nearly killed every Troll Kong in their way. Luckily the plant was still intact.

During the "Four Beasts" rampage in the Human World, the 8th Biotope was attacked by the "Four Beast" Gaoh which devastated most of the environment. What became of the Rainbow Fruit plant and the remaining Troll Kong population afterwards is unknown.

After the fall of the Meteor Spice, much of the Human World's resources were destroyed leaving many of its environments, ingredients and animals destroyed. It is likely the Rainbow Fruit and the Troll Kongs were also brought to a critically endangered status or extinction.

After the Four Heavenly Kings were able to revive the Billion Bird which supplied a hefty amount of resource to the Human World, the IGO was able to send out saiseiyas to begin reviving the Human World's ingredients.

At Toriko and Rin's wedding reception, the Dessert is served as a jelly with small piece of Surprise Apple surprise lv100, Dodurian Bomb and Bubble Fruit. 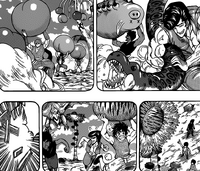 Acacia and his disciples capture the fruit 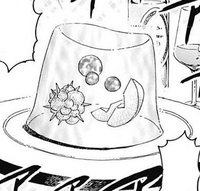 Rainbow Fruit in the OVA 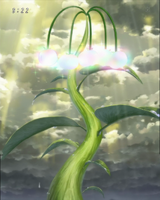 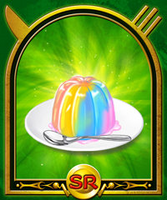