The Regal Mammoth (リーガルマンモス, Rīgarumanmosu), also called Ancient Food Treasure (古代の食宝, Kodai no Shokuhō), is a gigantic mastodon and one of the largest living creatures in the Human World alongside the Magma Tortoise. It is a beast that has existed since the stone age and is regarded as a gourmet treasure by man.[1]

It is a species of incredible size and mass, and even as an infant, it still is a creature of great size. From birth, at 10 meters of length, they can grow up to 50 meters in a few weeks. The individual that Toriko and his friends entered had a body length of 1,500 meters and a height of 1,000 meters. A Regal Mammoth has a strong and overweight furry red body covered in black stripes and has exactly six muscular legs and two long trunks. Its big white tusks are sharp and prominent and its teeth are equally sharp, befitting its carnivorous nature. It even has teeth-like protrusions within its trunks to help kill and shred up beasts while sucking them into its body. It has a long, thick tail that is dragged about as it moves with reptilian-like characteristics. What appear to be its ears are actually small vestigial wings with which it was supposedly able to fly with long ago.

The Regal Mammoth is a creature with a mostly indifferent nature that goes wherever it pleases and pays no attention to anything in its way, carelessly crushing anything foolish enough to get in its path, while ruthlessly eating anything that catches its eyes or gets trapped during its eating process. It is also a very protective parent, and will become very temperamental and erratic if something happens to its young, causing it go into a destructive rampage searching for it. A child mammoth can easily become frightened, and is far easier to subdue that an adult, and it will become even more fearful when away from its parent. When together with its young, the Regal Mammoth is quite calm, peaceful, enthusiastic, and jovial, and the child will be just as happy and excitable. A great difference is shown in the size as the young could be carried on the parents back easily. Also, some young may not have the Jewel Meat considering decades for the Jewel Meat to be made.

The Regal Mammoth isn't strong reproductively, but has incredible longevity, having a life span of 500 years. In that time, it never stops growing. Its gigantic body naturally gives it tremendous strength and titanic weight that can easily crush anything that gets in its path. Since its insides are that large, all manner of regular-sized beasts can live inside it, acting as an immune system that attacks anyone that enters the body. With an average capture level between level 48 and possibly higher with age, they are apex predators in the parts of the human world they inhabit, able to overpower armies of beasts withe lower capture levels with ease. Even a battle GT Robo has shown to be no match for it, being crushed underfoot without even an acknowledgement by the Mammoth, and the giant-sized GT Robo are unable to do any damage to it besides annoying it. However despite its power, it can be effortlessly killed by beasts with a capture level over 100 such as the Gaoh.

It obtains nutrients by inhaling beasts through one of its trunks, digesting them, and spitting the bony remains through the other trunk. It has 12 stomachs that are interconnected. In bigger mammoths, there is air circulating so animals and plants can live inside.

According to old rumors, it used the wings on its back to fly long ago, however the species appears to have lost that ability over time or it may have just been ancient tall tales.

While its meat is plenty delicious, most of the flavor in its body has been taken by a single piece of vestigial meat within known as the Jewel Meat that combines the taste of all the different parts of the beast. The Jewel Meat illuminates an incandescent lamp-like radiance that dulls jewels and lights up a night sky. It is considered to be a food treasure; can fetch a retail price of 5,000,000 yen for 100 grams. Though, the location of said Jewel Meat differs from one mammoth to another, making it very hard to find. This luxury food has been highly valued throughout human history. In ancient times, it was the centerpiece of grand feasts, and they say that because of its jewel-like glitter, it could double as a wedding ring. In order to win over a woman, a man would present Jewel Meat to her to prove his strength. Even now, it is a jewel that only the bravest and strongest can procure.

The vestigial wings on its back are also said to taste like poultry hide and have pretty good flavor.

Sunny used Knocking on and caught a Regal Mammoth by a request from Mansam for investigating it,[2] but it turned out the one he caught was a calf that is much smaller than its parents. Mansam then asked Toriko to catch the big one before the Gourmet Corp. (who dispatched 3 of their members in GT Robos to capture it)[3] do while he took the calf to the Research Lab and started processing it for the Jewel Meat.[4] At the Regal Plateau, the humongous Regal Mammoth parent squashed Zyper's GT-Robo while walking. Later, Gido arrived at the beast's location, and started engaging him in a fight that proved useless, as the Mammoth was way too huge for Gido to capture, thus, he decided he needs to enter inside. The Mammoth then sucked the surrounding beasts into one of its trunks, only to throw them out as bones through the other trunk.

Before Gido can get inside, the giant Mammoth started running toward the edge of the Plateau, and fell down the Regal Wall, where Sunny and Komatsu were climbing;[5] it came down looking for its child. They ran in shock as fast as they could, and even though Toriko dug a really deep hole where they all hid, and Sunny used Hair Net on the hole, they barely managed to avoid the Mammoth's fall. The giant Mammoth then stood and walked away, as if the fall never happened.[6] Coco then arrived and poisoned it, slowing it down and eventually stopping its movement. Coco then saw a different electromagnetic wave inside the beast's body; a GT Robo already infiltrated.[7] The Mammoth then sucked them all through its trunk, apart from Coco, and threw them inside its mouth, under its teeth, where Toriko and Sunny used all their power to hold the teeth apart until they jumped into its throat.

Inside its stomach, they found Cedre,[8] whom Sunny engaged in a fight while the others continued deep in.[9] Starjun's GT-Robo also entered, piercing its body in the process.[10] After Sunny was done, the Mammoth spit him outside. Toriko and Komatsu then find Starjun inside,[11] who threw Toriko with a blast, landing him next to the Jewel Meat.[12] The next morning, and after the fight with Starjun was over, the poison Coco put on it had finally run out, and the beast threw them all out; they had the Jewel Meat with them. Mansam released the calf Mammoth, which was guided to the parent by Kiss. The parent started stomping the ground in anger because of the poison.[13] They feast on the Jewel Meat, and Sunny adds it to his Menu after fighting with Toriko over it.[14][15]

A giant Regal Mammoth in the 1st Biotope had been slain by the Four Beast Gaoh in a single swipe from its claws as the creature made its way to the center of the Human World.[16]

The Regal Mammoth makes its video game debut in the PSP game, Toriko: Gourmet Survival 2, as the first major and largest boss in the game alongside the Earth Bear. It appears in the first area of the Gattsuki Continent.

The Regal Mammoth appears in the Nintendo 3DS game Toriko: Gourmet Monsters as a boss on Regal Plateau and can also be tamed and trained as well and used in Gourmet Royale beast bouts.

The Regal Mammoth has been featured in merchandise such as trading cards, as a miniature or keychain figurine, a candy mold, and in two video games. 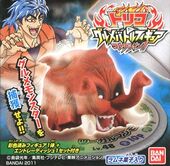 Regal Mammoth sticker
Add a photo to this gallery