Rikiya (力也, Rikiya), the Nigiri Master (にぎりの達人, Nigiri no Tatsujin), is the head chef of the famous sushi restaurant "Ouki", a restaurant with 300 years of history. His cooking skills ranked him 30th in the IGO Chef Ranking, making him one of the greatest chefs in the world.[1]

He is a tall muscular man with tan skin, short black hair, a thin black mustache and a large scar on the right side of his face. He wears traditional Japanese clothing that's violet in color with blue edges and he has a white apron tied around his waist. He also has white rope bands tied around his shoulders and head.

He is a noble and brave man who not only stood up against the Gourmet Corp., but was even courageous enough to defy their boss Midora, one of the most powerful individuals in the world. He was also amazed at Komatsu's courage and commitment to being a chef.

Rikiya makes his appearance, entering the stage 9th in the Cooking Festival, after Kopuriko. The MC mentions that Rikiya is from the famous sushi restaurant Ouki, which has a 300 years of history.[2] Later in the Cooking Festival's first event, Triathlon Cooking, in the bicycle part, the MC comments that the chefs are making it easily through the wild beast area and that top ranking chefs will not lose to even a Gourmet Hunter, to which Rikiya says that actually many of the chefs are former hunters and that beasts at such levels are not a problem. In that moment Rikiya feels the Intimidation of Brunch, when he was passing Rikiya and several other participants. Little up ahead, Brunch breaks a stone cliff bridge, cutting the path of Rikiya, who is still able to pass the three preliminary events: Triathlon Cooking, Scale Death Cooking, and Entire Island Cooking. In the Championship Tournament, his opponent is Klaraman.[3] However the Cooking Festival was inadvertently cut short by the arrival of the Gourmet Corp. who invaded the fest in order to kidnap its chefs.

As the Gourmet Corp. invaded the Cooking Stadium, many tried to fight them off but despite all the chaos many chef were still captured, including Rikiya who subdued by Gur and imprisoned within the Cage Beast. Later on after the fall of the Meteor Spice, Rikiya and the rest of the chefs were taken back to the crumbling Gourmet Corp.'s Gourmet World HQ where they came face to face with the Gourmet Corp. boss Midora who commanded that they would now be working for him. Despite this order, Rikiya stood up for himself claiming that he would not cook anything for a man like Midora despite his power. Midora then offered any chef that could make him a delicious meal a chance at freedom and being returned home. Komatsu then volunteered himself and prepared a meal that impressed Midora, however Komatsu refused to leave and wanted to stay believing he could make a change there and that Toriko would eventually come find him, naturally all of Komatsu's statements impressed everyone there including Rikiya.

The chefs preparing to fight the Gourmet Corp. 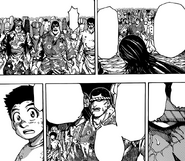 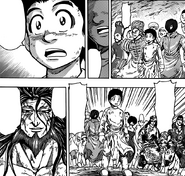