The Rock Wolf is a type of canine mammal beast that lives on Melk Mountain. It seems to prefer traveling in a pack which makes it easier to ambush its prey. They seem to co-exist with Furnips and will try to corner their prey together for a higher chance of success.

In the manga, the Rock Wolf was not given a name or capture level, making it difficult to determine if its profile in the anime is canon to the manga. 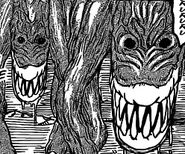 from Toriko: Gourmet Battle
Add a photo to this gallery
Retrieved from "https://toriko.fandom.com/wiki/Rock_Wolf?oldid=126535"
Community content is available under CC-BY-SA unless otherwise noted.