Ruby Crab (ルビークラブ, Rubīkurabu) is a subterranean breed of ruby-colored crab that lives in mines deep underground and boasts a high capture level which reflects how difficult they are to find rather than their ferocity, with their actual level being estimated at less than 10.

Ruby Crabs are small creatures that only grow to be about 60 centimeters in length and can weigh up to 9 kilograms when fully grown. Their shells are brilliant and lustrous, shining like the most priceless gems. However their insides are just as soft as any crab.

It is also known as the "Mine Crab" and it is not just limited to ruby, with many other kinds of crabs existing that have all sorts of valuable gem shells, such as the Emerald Crab, Sapphire Crab, Amethyst Crab, Diamond Crab and the Stained Crab.

Despite their high capture level, these creatures are virtually harmless and are quite easy to capture if found. They mainly live together in large colonies in caves deep underground.

As Jewelry and Food[edit | edit source]

Ruby Crab shells are prized as jewels, and sell at a higher luxury price than its meat, with the entire crab being worth 25 million. Due to its many varieties, its shells can be used as substitutes for all manner of rare gems.

It is a high class ingredient crab with an excellent taste that can even be eaten raw, and just 4 kilograms of its meat are worth 2 million yen. However due to their rarity and difficulty to locate, they rarely make it on the market, even though their taste is unparalleled.

As Toriko made his way down Heavy Hole, he began suffering from low stamina and wondered if he would be able to survive. Just then, he located a nest of Ruby Crabs, and gave thanks to the small creatures as he was able to restore his strength with their meat.

In the video game series, the Ruby Crab is shown to have a variety of different subspecies: 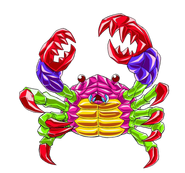 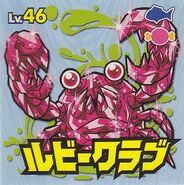 Retrieved from "https://toriko.fandom.com/wiki/Ruby_Crab?oldid=153250"
Community content is available under CC-BY-SA unless otherwise noted.