The Sandoriko (サンドリコ, Sandoriko) is a type of flower which inhabits the lands of Area 7. The flower itself, when present, can induce fear at a genetic level in all inhabitants of Area 7 despite looking harmless. This seemingly harmless flower is actually known as the cause of a mass extinction within the areas of the Mountain Continent with many powerful creatures cowering in fear even at its mere presence.

It is the Hors d'Oeurves in Coco's Full Course Menu.[1]

The Sandoriko flower's head takes the shape of a circular spiked plant with a mouth. Its has big lips and sharp teeth to go along with it. The flower is supported by a thick stem. The leaves of the flower are of jagged designs, two leaves protruding at the base of the stem.

Whilst the flower itself is harmless when not agitated, the flower's immense danger comes from the pollen it produces if it becomes agitated, which causes a deadly allergic reaction to those who inhale it, being deemed as "Pollen Allergy". The plant is easily agitated as shown when Sunny simply touched the plant, it instantly produced pollen.

The Pollen Allergy, if caught, will force all moisture within a creature to leave its body, leaving the creature completely dehydrated within mere seconds of catching the allergy, causing death even to large creatures. This pollen is known to have a fatality rate of 100% when found naturally and when the allergy is caught, death is certain to whichever creature catches it. Kaka managed to create a weakened variation of this allergic pollen through selective breeding. The plant Kaka produced has a much lower fatality rate compared to that of a natural version however despite its lower fatality rate, it can still cause heavy amounts of moisture to leave a creature's body, causing dangerous dehydration to whoever caught it as shown when all Four Heavenly Kings became affected with the pollen and began to cry and sweat heavily despite the small dose of pollen that the plant produced.

As such, due to its fatal effect, the plant is not to be used as a weapon, but rather a deterrent.

When cooked however, the Sandoriko flower forms the antidote for the allergy caused by its own pollen. Komatsu is the first to learn this after hearing the voice of the ingredient.[2]

The Sandoriko developed after the Blue Nitro began stealing PAIR, which drastically reduced the available nutrients in Area 7. The flowers caused a mass extinction and were threatening enough to limit the Nitros' interference, so Area 7 slowly recovered.[3]

When the Gorilla Taurus stops the monkeys of Area 7 from attacking the Four Heavenly Kings, a small Sandoriko flower appears from a trapdoor in the ground and instills fear in the monkeys. The ground opens up under the Heavenly Kings and they drop down into Area 7's civilization, where they are approached by a Nitro holding the flower.[4]

When the group heads back to the surface, "Kaka" explains the usefulness and the properties of the flower. On the surface, the flower is used to scare off a Sapphire Ant. Sunny accidentally agitates the plant, and the Heavenly Kings experience the severe pollen allergy. They survive thanks to an anti-allergy medicine and Super Reservoir Sea Cucumbers, and "Kaka" states that its flower is a weakened version and that the natural version would instantly kill them.

After reaching the foot of Pot Mountain, the flower is used against a defenseless Iai-Aye as a test of resolve by Toriko. Afterwards he kindly offers the monkey the anti-allergen, a Super Reservoir Sea Cucumber, and food.[5] During the Heavenly Kings' fight with Gorilla Taurus, Kaka offers to use the flower, but Coco refuses and instead uses his Devil Poison to deliver the final blow.[6]

As the group passes the Birth Cry Tree, they enter a field of natural Sandoriko, which are gigantic in size. The Denshark manages to hide its presence completely and avoids even slightly agitating the plants.[7]

When the group first encountered Bambina, "Kaka" tried to use the flower, but the Monkey King sneezed and scattered them all.[8] During the fight between the Heavenly Kings and Bambina, the battle is taken to the base of 100G Mountain where the natural Sandoriko become agitated and release their pollen, causing both the Heavenly Kings and the Monkey King to lose immense amounts of moisture.[9] The Sandoriko finally stop releasing pollen when PAIR becomes fully prepared, distracting the Sandoriko with its immense taste.[10] When Komatsu fully recovers, he discovers that the Sandoriko itself is the antidote to the pollen allergy it produces but the creatures of Area 7 were unable to discover this knowledge due to the fear of instant death that the pollen causes.[2]

After the true preparation of PAIR, Sandoriko is among the food offered with PAIR. Coco comments how dangerous the ingredient is, but at the same time loves the taste of it. He decides to include it in his Full Course Menu and announces it as his Hors d'Oeurves, but he is ignored.[1] 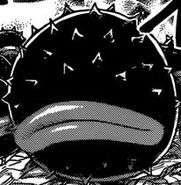 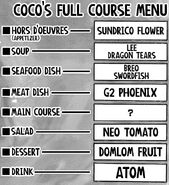