Saucetopus (オクトパソース Okutopasōsu) is a species of land dwelling octopus who, instead of being filled with ink is filled with different kinds of sauces.

There are 4 known species of Saucetopi, each with its own brand of sauce: Soy Saucetopus (Soy sauce), Tacocto (Salsa), Vingartopus (Vinegar), Worcestopus (Worcester sauce). Each can be differentiated by the color of their skin, which comes in red, pink, orange and brown. Other than this, young Saucetopus look like average octopi, however adults are the size of giant octopi.

They are harmless creatures that are very easy to catch (at least when they're young) and they move about at quite a sluggish pace. They are mainly bred in the 1st Biotope's Mushroom Woods.

Their sauces are quite useful as condiments and seasonings on almost any dish and are quite handy in the wild if a caught ingredient doesn't have enough flavor. In Toriko: Gourmet Battle, it is shown that Saucetopi can be deep fried and eaten skewered and served as snacks on New Year's, and eating one may heighten one's intuition.

Saucetopi are first seen being caught by Komatsu after he and Sunny got lost in the Mushroom Woods after they were attacked by Rock Drums. Using them, Komatsu was able to enhance the flavor of some Cream Mushrooms which Sunny greatly enjoyed. He later caught a giant Saucetopus for Komatsu.

The Saucetopus appears in Toriko: Gourmet Battle as both a huntable beast and collectible card. Its card's statistics classify it as a "Speed" class beast with an "R++" level rarity and a single star ranking.

An adult Saucetopus next to Komatsu 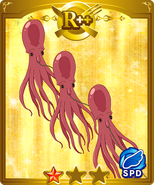 Saucetopus from Toriko: Gourmet Battle
Add a photo to this gallery