The Scale Kong is a giant intelligent anthropoid ape that lives in mines. Some live in the mines of Melk Mountain and are one of the few beasts that dare to enter the summit.

A Scale Kong is a large, bulky, bipedal ape that stands at 12 meters in height and its girth makes it weigh about 11 tons. True to its name, its large muscular body is covered in green scales with the exception of its face, chest and abdomen. Its forearms and shins are very large and muscular, and its hands have 6 fingers each and its feet have 6 digits each as well. It has a single cycloptic black eye with a slit pupil and a mouth full of sharp teeth and a rather long slobbery forked tongue with three ends.

Scale Kongs form social groups based around a dominant male who proves its superiority over the other males and stands above them as the alpha male. They mainly live in mines and caves in mountainous regions such as those of Melk Mountain. They are quite aggressive and may approach a settlement regardless of the resident's strength. If its scales are removed it becomes quite cowardly.

The Scale Kong's meat is not fit for consumption, as such it has no value as food. Its scales however fetch a high price on the luxuries market as decoration and other accessories.

A single Scale Kong trespassed near Melk the Second's workshop while she, Toriko and Komatsu were outside. Luckily the beast was easy enough for Melk to subdue, as she managed to scare it away after creating precision air cuts that removed all the scales on its body, forcing it to run away.

Scale Kongs appear in Toriko: Gourmet Survival 2 for the PSP as common enemies in the Gattsuki Continent's Table Prairie, appearing only at night under certain conditions. They mainly attack by punching and throwing rocks. They use the exact same fighting style and model as a Troll Kong. 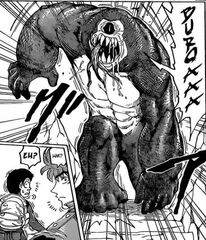 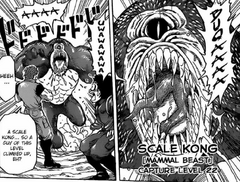 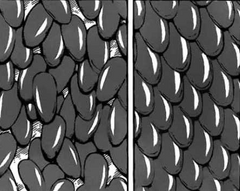 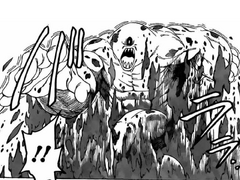 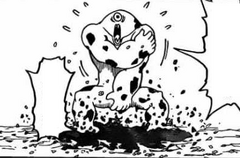 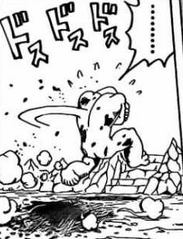 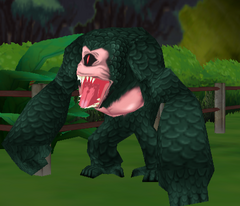 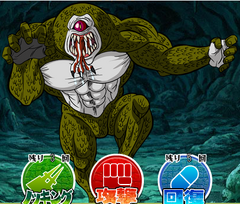 Scale Kong sticker from Appearance Zebra Arc
Add a photo to this gallery
Retrieved from "https://toriko.fandom.com/wiki/Scale_Kong?oldid=129965"
Community content is available under CC-BY-SA unless otherwise noted.