Shigematsu (茂松, Shigematsu) was the Vice-President of the IGO whose authority was second only to President Ichiryu. He was a man of powerful authority and tremendous strength who took his position very seriously.

In truth however, he had been brainwashed by Joie at an unknown point and forced to join the dark organization known as NEO and act as a spy for them within the IGO against his own will. In his final moments he was able to regain his old identity and pass on with his true heart and mind. 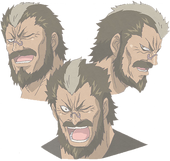 He is a very large, muscular man with a big, black beard and mustache and thick, black hair with a stripe of white hair down the middle.His typical attire consist of a black sleeveless v neck and laced shirt, green pants tuck inside knee high laced boots and a white cape. Noticeably on his left arm are three long scars and wears a teeth string bracelet and strapped on his right hip a brown holster like bag with an unknown object sticking out. He keeps one eye closed at all times, as well as a nose plug over the bridge of his nose. When these are removed, which he does when preparing to fight Grinpatch, his appearance becomes wilder and his muscles bulge, causing his clothes to tear.

Shigematsu was said to be an ambitious man, a trait which even President Ichiryu admired. He was also a proud and loyal man with great loyalty to Ichiryu and his comrades. When Grinpatch came to Biotope 1 to retrieve the GT Robos, Shigematsu is shown to be disappointed that Starjun or Tommyrod had not come, showing not only his delight in fighting, but also that he had prior experience with the Gourmet Corp. and did not fear their kind.

Sadly when Joie used his "Taste Change" on him, Shigematsu's true identity was repressed and he was forced to become a merciless and unfeeling monster. In the end thanks to Toriko, he was able to regain his original personality at the cost of his own life, but was able to spend his last moments as himself while thanking his good friend Ichiryu.

Having been the Vice-President of the IGO, Shigematsu was a man of both great strength and authority whose influence was second only to Ichiryu himself and could command the vast majority of the IGO's staff. His physical strength was so great that he did not fear the Sous Chefs of the Gourmet Corp and could easily enter the Gourmet World.

When he removes his nose plug and opens his left eye, his body goes through a drastic metamorphosis, causing his muscles to increase in size and his face to become more intimidating and ferocious. His face takes on snake-like features, such as a forked tongue and slit pupils.[1][2]

When Mansam asks him about Zebra's release due to it making defense of the Regal Mammoth easier, Shigematsu replies that it is not going to be easy and Director Glass will have to worry about losing face too.[3]

Shigematsu and Mansam confronted Grinpatch when the chef came to reclaim Gourmet Corp.'s GT Robos in Biotope 1, and they removed the limits on their strength. Shigematsu had hoped to face Starjun or Tommyrod instead.[4]

Shigematsu is shown looking over on the horizon waiting for Rin and Mansam to get the beast under control. He asks Mansam to hurry because it may be the last Cooking Festival.

While Mansam is distracted fighting a horde of GT Robos at Cooking Festival, he is suddenly pierced through the torso by the tongue of Shigematsu's Beast. The vice president reveals himself to be a member of NEO[5] and takes the opportunity to attack Mansam.[6] When Midora shoots his Meteor Spice on Cooking Island, Tokage appears from the ground to take away Shigematsu and the other members.[7]

At NEO Headquarters he heads out with the rest of NEO.[8]

It appears that at an unknown point during the year and a half after the events at the Cooking Festival, the Four Heavenly Kings and Mansam realized that Shigematsu, along with Uumen Umeda and Teppei had been "Taste Changed" by Joie which had basically enslaved them. Toriko then told Mansam that he intended to restore them all back to normal and Mansam explained that so long as the "damage" created by Joie's Taste Change remained they could not be restored, so the only way to undo the effects are to inflict even greater damage to their bodies to the point where they either "return to normal" or "die first". With this Toriko became more determined to restore Shigematsu and the others to normal.[9]

Shigematsu waits with other NEO members while Joie converses with the Gourmet Nobility on the Dining Planet.[10]

After the Heavenly Kings, Komatsu and the people of Hex Food World celebrate with a feast for successfully capturing AIR, NEO are preparing themselves to ambush everyone and steal AIR. After the Daruma Hermit's speech and thanking the Heavenly Kings and Komatsu as well as the Hex Food Beast Knights for capturing AIR, NEO attacks. Shigematsu's Beast unleashes Breath of Eternal Sleep, and Teppei stealthily dispatches Komatsu.[11] Shigematsu is surprised to see that despite his beast's technique, people are still standing. He then announces that the attackers are NEO and they will be taking AIR, and tells everyone still standing that they will not need to respond and to die a quick death; however, Toriko tells him that he did not need to say anything more either and should only speak when his death throes are only seconds away. Brunch revives everyone through defibrillation by shocking them and causing their hearts to beat once more. Sunny disperses the breath from Shigematsu's beast and Zebra quickly decapitates the beast. When everyone prepares to heal Komatsu, Toriko insists the NEO members be left to him. Just before Kariu can unleash his attack, he is quickly wiped out along with Boneless by Toriko. Shigematsu responds to Toriko's sudden attack and shows his full power however before he can do anything, he is quickly launched away by Toriko's new attack, the Infinite Nail Punch.[12]

As Shigematsu's body continues to be launched through the air by Toriko's powerful and continuous attack, the intense pain that is being inflicted on his body begins to slowly undo the effects of Joie's Taste Change, removing its diabolical effects and restoring Shigematsu to his old self. He begins to remember the kindness Ichiryu had shown him and to cry tears of remorse for the vile actions and the betrayal he committed. Sadly, by the time the pain of the attack finally releases him from Joie's control, his body is already too badly damaged, so with his final breath Shigematsu hopes that as penance for his actions his body would be consumed by nature's creatures. The wish is then granted and he is quickly eaten by a flock of Angler Birds, finally putting to rest the mentally tortured and remorseful vice-president.[13]