The Silver Grizzly is a large beast of the ursidae family that makes its home in Ice Hell.

Silver Grizzlies are large ursine beasts standing at 14 meters in height while standing on their rear legs, making them quite imposing to the average sized human, they also an incredible weight of 9 tons. Silver Grizzlies as their name suggests are covered in white fur that looks almost like silver. On their heads they have three horns growing vertically down their foreheads.

In the anime, they are shown to be incredibly territorial and will attack anything that enters their domain. Many Silver Grizzlies make their homes inside icy caves, such as the ones at the center of Ice Hell.

Silver Grizzly flesh is a precious source of protein in the frigid wasteland of Ice Hell and can be quite tasty raw with if it has some salt sprinkled on it. Some gourmands value its paws and Silver Grizzly paw is among the rarest of rare "Arctic Delicacies" served in upscale restaurants. In the anime, Komatsu is shown making a stew out of its meat and added some Icicallions to add more flavor to the stew.

After Toriko, Komatsu, Takimaru and Match and his subordinates arrived at the center of Ice Hell they were attacked by a hostile Silver Grizzly which, however the creature was soundly defeated by Match who cut it to pieces. They later cooked and ate its meat in order to gain some stamina before getting the Century Soup.

In Toriko: Gourmet Survival 2 for the PSP, the Silver Grizzly species appears in the Gattsuki Continent's Freezer Ice Field which is very similar to Ice Hell and they can be hunted for their meat and experience. Other varieties of Silver Grizzlies exist in Table Prairie known as Black Grizzlies which have black-colored fur and are adapted to warmer environments.

In Toriko: Gourmet Monsters for the 3DS, Silver Grizzlies are one of the many tamable enemies in the game and can be either hunted or caught and trained for battle in the Gourmet Royale coliseum bouts. It can be caught or hunted in Ice Hell. 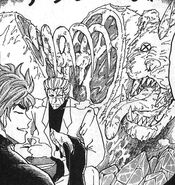 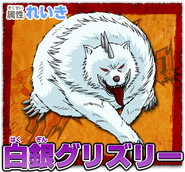 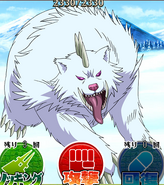 from Toriko: Gourmet Battle
Add a photo to this gallery