Slow Rain Hills is a mountainous region within the Area 8 of the Gourmet World that experiences never ending rainfalls of giant water droplets that fall at an unusually slow pace as though they were in slow motion. The reason for this phenomenon is that the air present in this region is very dense due to the presence of AIR and the Giant Air Tree. People will have to move in a extremely slow pace as the density makes the air more closer to a liquid or a solid rather than a gas. It is located in the center of the Area 8 continent surrounded by the wasteland known as the Heavy Rain Region in which different kinds of torrential rains fall.

It was here where Melk the First had kept and presented the newly finished knife he had crafted for Ichiryu, which he accepted with gusto. From here Ichiryu, Melk and Atashino set off to locate AIR.

As AIR was ready to ripen, Coco, Sunny, Zebra, Komatsu, Mappy and the Hex Food Beast Knights made their way to Slow Rain Hills in order to prepare AIR before its fall. After much difficulty they were able to prepare AIR while preserving all of its flavor. 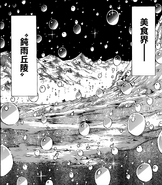