Sunny's Treehouse is a natural and tropical adobe that consists of three structures placed around the branches of a large tree that is located in the middle of a pristine lake and it is here where Sunny resides with his animal partner, Quinn.

The first structure appears to be an outdoor kitchen and/or a dining area and resembles a tropical wooden hut with a grassy roof. The second structure above the first, appears to be a modest one story house, though much of it and its interior is not seen clearly. The third and highest structure is not clearly seen but is located near the top of the tree. Around the tree there are several platforms and ladders in order to get around. Being in the middle of a lake, the only way to reach it is to cross the pier leading to it from the shore. The lake itself is large and vast and there are several trees growing from the lake, it is in these waters where Quinn rests. 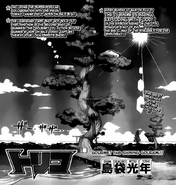