Taxsheep (タクシープ, Takushīpu) is a breed of large sheep that can move at an incredible speed of 150 km an hour. They are mainly used as rental transportation in the Gourmet Temple to help visitors see the Food Temples at a faster rate as all of the temples are located far apart from each other.

Taxsheep are incredibly large, easily the size of a large van. Its body is covered in fluffy wool as expected of a sheep and it has two small horns on its head. Its face has a rather cutesy appearance which shows off its docile nature. Taxsheep also have the top part of their wool stylized into the shape of a seat for their riders to sit on. Seat belts are also added to it for the riders security since while running at high speeds the rider may fall off.

As mentioned above, the Taxsheep can move at incredible speeds of 150 kilometers an hour and can easily travel across the 8,000,000 hectares expanse of the Gourmet Temple in less than a day. It is also a safe driver, making sure to maintain balance and momentum to ensure its passenger's safety. It also appears to have a powerful set of lungs, as it can inhale and exhale large amounts of air in the forms of gusts. Its large lungs may explain its ability to maintain its speed without discomfort as they most likely help to distribute oxygen through its body more efficiently.

Toriko and Komatsu first encounter a Taxsheep when they pay a visit to the Gourmet Temple. When they enter the temple grounds, they are met by a member of the temple's staff who offers them the Taxsheep to hasten their visit through the temple.

In the anime, the Gourmet Temple's overseer Pahpoh requested Toriko's aid in capturing the rare Longevity Sugarcane for their upcoming Shichi-Go-San Festival. He then sent out a Taxsheep to pick up Toriko and Komatsu. 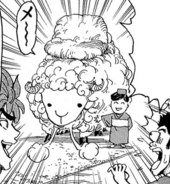