Toriko had a temporary Tree House during his stay at Gourmet World with Komatsu, after the decay of the Gourmet Age. Once he gathered enough ingredients to carry back to the Human World, the Heavenly King sliced the huge tree in order to be able to bring out the numerous ingredients that he had stored on its inside to restore the Gourmet Age.

It is located within a small valley near the Landsea and the valley itself is contained within a Rest Room which keeps it safe from outside threats, which is how Komatsu was able to survive during his stay there.

It is a tree with a rather short trunk but a large crown of leaves that form into a tall conical shape. The trunk of the tree has a large opening that leads underground into Toriko and Komatsu large food storage room where they keep a vast abundance of ingredients for the Human World. There is also a small door next to the opening which leads into the main interior of the tree. The interior is simplistic with roots growing along the walls and the floor appears to be tiled. There are three trunks which are used as furniture, a large flat one which is used as a dining table and two smaller shorter ones which are used as chairs. There is a vertical opening next to the dining area that shows the inside of the storage room, and there is also a small archway which leads into an unseen room which is presumably the kitchen.

After successfully acquiring Mountain-Eater Pelican eggs in the Landsea, Toriko went back to the tree house to store away the eggs and meet up with Komatsu. After eating a small dinner, Toriko informed Komatsu that they probably gathered enough ingredients to return home which instantly cheered him up due living such a stressed life surrounded by dangerous beasts. Komatsu then asked how they would take all the ingredients out of the tree and Toriko calmly replied that he would carry it. He then used his Knife technique to cut the tree in half much to Komatsu's shock and then proceeded to take out the ingredients and take them to the Human World.

Toriko stores a Mountain-Eating Pelican Egg in his house 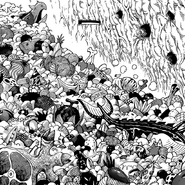 The many stored ingredients

Inside the tree
Add a photo to this gallery