The Uni-horn Bear (一角ベアー, Uni-horn Bear) is a species exclusively found in Toriko x One Piece Crossover which resides on Hungry-la Island.

It is a species of giant brown bear with a sharp purple spiral horn protruding from its forehead. Its gigantic size easily dwarfs average humans in height.

Its meat is too tough to chew, making it inedible.

As Toriko, Luffy and their friends traveled Hungry-la Island, they came across a dangerous pack of giant Uni-horn Bears who instantly attacked the crew upon sighting them, but due to their lack of use as food Toriko saw no value in killing them, so he and the others simply tried to outran them, eventually Luffy was able to knock out one without killing it but three still remained in hot pursuit. However, Uni-horn Bears were all soon blown away by the Hungry-la Bird which then engaged the traveling group in battle. 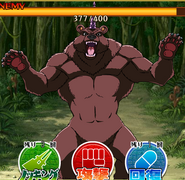 Uni-horn Bear from Toriko: Gourmet Battle
Add a photo to this gallery
Retrieved from "https://toriko.fandom.com/wiki/Uni-horn_Bear?oldid=145033"
Community content is available under CC-BY-SA unless otherwise noted.