The Water Storage Camel is a tall species of camel standing roughly at 3 meters in height and 4 meters in length and easily stands over average humans. Aside from its large size, it still mostly resembles a regular camel but, oddly enough, has two faucets on the side of its belly, which can be used to extract water from its large humps. These faucets appear to be artificially added to the Water Storage Camel, as its cousin, the Wine Camel lacks these devices.

The Wine Camel is notable for being slightly taller than its cousin, standing 3.2 meters in height and 4.5 meters in length; its fur and skin are purple, the same color as the wine it carries. Wine stored in a hollow between its humps can be "milked" from its udders.

They are docile and peaceful creatures that mainly inhabit desert environments, but can also live in human settlements.

These beasts can be domesticated and can serve as loyal steeds through the harsh deserts of Sand Garden.

The water produced by these camels can relieve the thirst of any traveler in a hot environment and it can produce enough water to last for days. The special faucets that can be added to these camels makes water extraction very easy to do. The wine of the Wine Camel is a luxury drink, with High-quality Wine Camels having a value on par with luxury fruit wines. The quality varies by Wine Camel breed and gender.

These beasts were given to Toriko, Zebra, and Komatsu by a camel renter named Hades after they saved her village from an Eight-Tail Scorpion so they could use them to travel to the Gourmet Pyramid. The camels sadly were not able to take their riders all the way to the Gourmet Pyramid and ended up dying within the sinking sands of the Red Sand Maze.[1]

In the manga, both the camels that accompanied Toriko, Zebra, and Komatsu, died upon arriving to the Red Sand Maze and their bodies were then sucked into a sinkhole. In the anime, however, both Camels escaped upon arriving to Red Sand Maze and went back to the village. After Toriko and the others came back from the Gourmet Pyramid, they found the camels back with Hades alive and well. 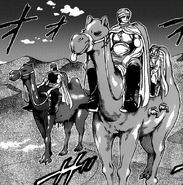