Wul Jungle, also known as Hell Plant (植物地獄 (ヘルプラント), Herupuranto), is a forest located in the Northern Wul Continent. It is a jungle dominated by carnivorous plant life. The whole forest is interconnected and on top of it grows the Blue Blood Corn. During its rampage in the Human World, the King Octopus Kong destroys much of the jungle, which likely suffers further damage after the fall of the Meteor Spice. 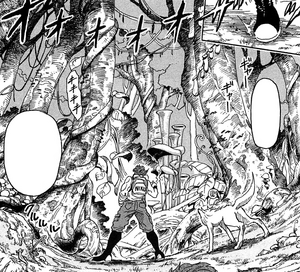 The Wul Jungle as seen in the manga