Zen Ou (膳王, Zen Ō, literally meaning "Meal King") is a 10-star restaurant on the top floor of the Gourmet Towers' knife building in Gourmet Town.[1] The owner is the 5th best chef in the IGO's ranking, "1 Millimeter Yuda", the master of medicinal cooking. The restaurant itself contains the legacy of Yuda's master as well as the name of his deceased combo partner, Zen.[2][3]

After the fall of the Meteor Spice, which destroyed much of Gourmet Town, Yuda was forced to relocate to one of his lesser Zen Ou chain restaurants, "Zen Ou" Store #15.

All of the meals served in Zen Ou are highly nutritional and have medicinal properties, which are highly beneficial for Food Immersion.

After the fall of the Meteor Spice caused much destruction and a heavy loss of resources for the Human World, Zen Ou was one of the many affected as the Meteor Spice destroyed all of Gourmet Town as well as the Gourmet Towers where Zen Ou was located, forcing Yuda to relocate to one his lesser Zen Ou chain restaurants, "Zen Ou" Store #15. Due to the loss of ingredients, all restaurants (including Zen Ou) were forced to serve Food Tablets until the food crisis could be resolved. After the successful revival of the Billion Birds and their mass distribution, Zen Ou was able to serve real food on its menu once again and the Billion Bird proved to be an excellent ingredient for Yuda due to its medicinal properties.

The Gourmet Towers knife building, the location of Zen Ou 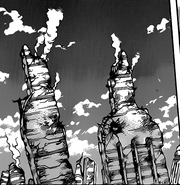